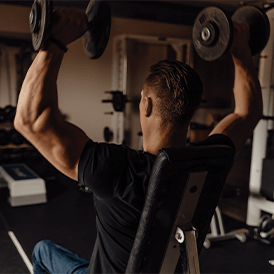 Dymethazine (DMZ, Mebolazine)
Chemical structure: 2,17-dimethyl-5-androstan-17-ol-3,3′-azine
Molecular weight of base: 300.435089 Da
Active Life: N/A
Anabolic/Androgenic Ratio: 210:96-95
Dymethazine, sometimes referred to as DMZ, is an anabolic steroid/prohormone originally brought to the consumer market covertly as a dietary supplement. It was first described in 1962 and received little interest from the medical community. Reports claimed an anabolic androgenic ratio of 210:96.
Dymethazine is a rather interesting steroid with a unique molecular structure, which also happens to give dymethazine its name. The dymethazine molecule is essentially two superdrol (methyldrostanolone) molecules, with one flipped and then joined at center via a pair of nitrogen atoms. This unique bond has been termed an azine bond, from the class of organic chemicals known as azines. In the body, this bond is split and dymethazine breaks down into superdrol, allowing it to bind to the androgen receptor and demonstrate its anabolic effects.

Ligandrol (VK5211, LGD-4033)[2] is a novel nonsteroidal oral selective androgen receptor modulator (SARM) for treatment of conditions such as muscle wasting and osteoporosis,[3] discovered by Ligand Pharmaceuticals and under development by Viking Therapeutics.
Ligandrol has been found in World Anti-Doping Agency (WADA) samples and in racehorses too. Like anabolic steroids, it can stimulate muscle growth. “SARMs have shown superior side effect profiles compared with anabolic steroids, which arguably makes them attractive for use by individuals seeking an unfair advantage over their competitors”.

Methylstenbolone (nicknames M-Sten, Methyl-Sten, Ultradrol), also known as 2,17α-dimethyl-4,5α-dihydro-δ1-testosterone (2,17α-dimethyl-δ1-DHT) or as 2,17α-dimethyl-5α-androst-1-en-17β-ol-3-one, is an orally active anabolic-androgenic steroid (AAS) and 17α-methylated derivative of dihydrotestosterone (DHT) that has never been introduced for medical use. It is a designer steroid and has been sold “over-the-counter” via the internet as a “dietary/nutritional supplement”. Methylstenbolone is the 17α-methylated derivative of stenbolone, which is similarly androgenic but only about half as anabolic, as well as the δ1-isomer of methasterone (2α,17α-dimethyl-DHT).